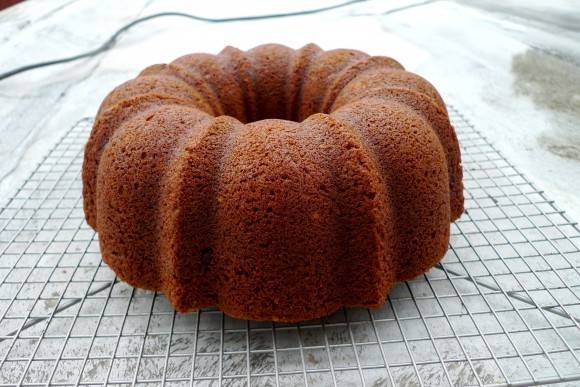 Each year when I put together my fall to-do list, there is one item always at the top: the Pumpkin Chocolate Chip Bundt Cake.

This bundt is the perfect cake for fall: moist, spiced, hearty and chock-full of chocolate chips. It’s the type of cake you want to eat at the end of a long day raking leaves or cleaning your closets. It’s also the kind of cake you want on a crisp Sunday morning, huddled with a steaming mug of coffee and a wrapped in a thick blanket.

Of all the recipes my mother makes, this one is my favorite. She found it in the Harrowsmith Cookbook v. 3, which she purchased for $17 from L.L. Bean on July 21st, 1988. Yes, she made a note of it.

The Harrowsmith Country Life magazine was a popular Canadian living magazine in the 1980s, which catered to hippie environmental homesteaders. They put out three excellent cookbooks, with recipes from editors, contributors, and readers alike. My mother has cooked out of this one on many occasions, always going back to the simple pumpkin bundt, everyone’s favorite.

When I moved to California, one of the first things that I bought for my own kitchen was this shiny bundt pan from Cookin’ on Divisadero, so that I could make the cake as soon as seasonally appropriate.

[Not that fall is necessarily the season – every year, my mother would ask me what type of birthday cake I would like her to make for me, and each year, the decision was brutal. Oreo ice cream cake with mint chocolate chip? Or a pumpkin bundt? Growing up in New England, either could be suitable for my May birthday  – sometimes the thermometer read 90 degrees, other times there would be frost visible on the ground.] 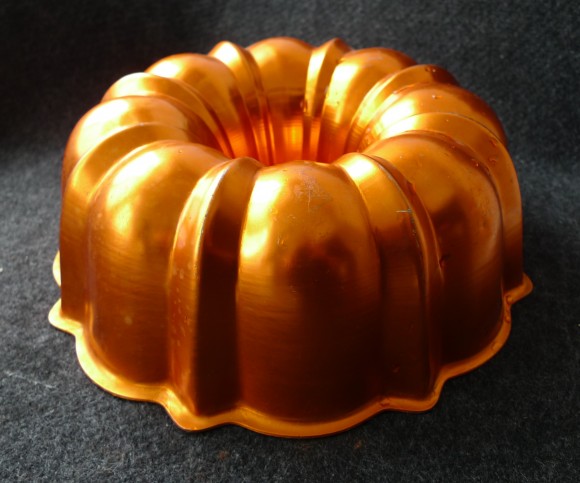 I’ve made this cake many times in my life, first at home with my mother, later as a teenager to take on hiking trips, or in college for the ladies of Dower House, my home at Wellesley for three years. Sometimes I’d make the full bundt, but more often than not, the batter became muffins, perfect to wrap in foil, and tuck in someone’s bag as a surprise. Muffins were also the practical fix, if, say, you ate too much of the batter to make a full bundt. 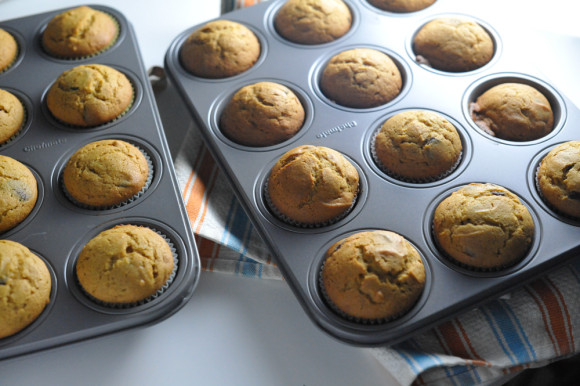 This year I started a new family tradition. I baked the cake, and sent half in the mail to my brother, John, a freshman at George Mason. He is living without a dorm kitchen, and was craving the Pumpkin Bundt as much as I was. Another good thing about this cake, is that it holds up fairly well in the mail for a few days. 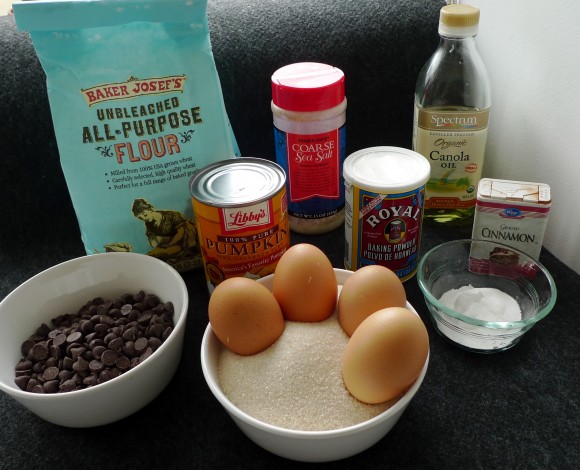 I set about preheating my oven to 350 degrees, and greasing and flouring my beautiful bundt pan. [This is key, otherwise your cake will stick to your bundt.]

The first step was sifting together all the dry ingredients in a bowl. Then, in a large bowl (or in my case, the bowl of Martha my KitchenAid mixer), I beat the eggs and sugar together.

Then, I added the oil and the pumpkin to the egg mixture, making sure to mix well. This takes a little bit of effort if you are stirring on your own, but it can be done!

I stirred the flour mixture into the wet mix, (on the slowest speed on the mixer to avoid a flour explosion), and lastly, folded in the copious amount of chocolate chips (and pecans, if you’d like them). I generally just use chocolate chips, because that’s what my mother does. (Mostly I believe, so that she could send this to school with me without worrying about children with nut allergies.) 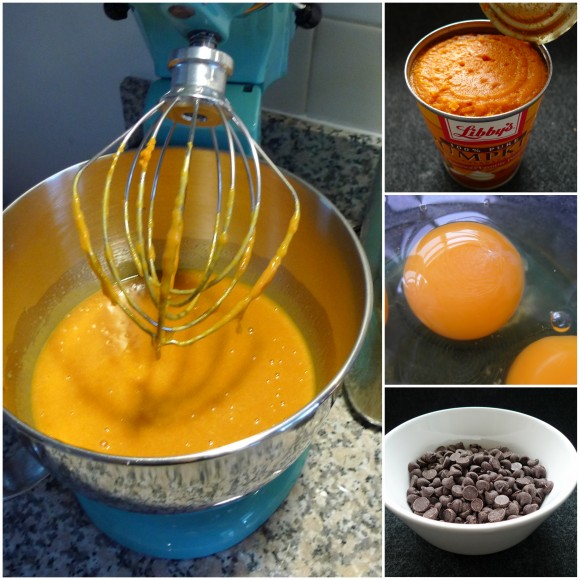 I poured it all into my bundt, (which I double-triple checked that I had greased and floured first!). The hardest part about this recipe is fighting yourself from eating all the batter. 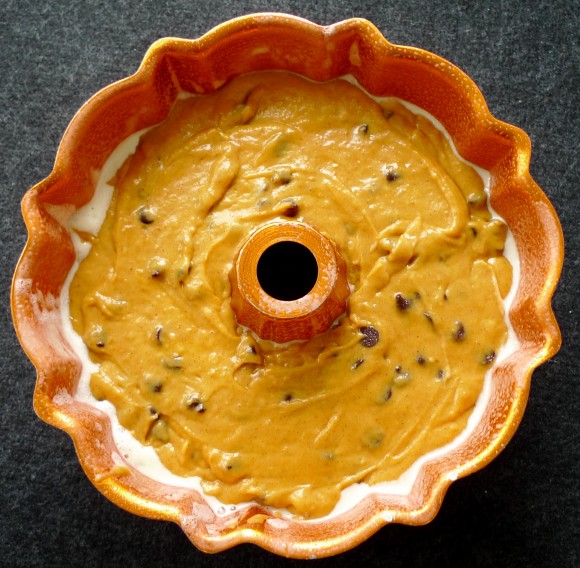 After an hour in the oven, I took the bundt out to cool for ten minutes in the pan before turning it out onto a rack. I listened to my mother’s voice in my head: “Just wait patiently!” This step is fairly crucial – waiting makes the difference between a bundt in one piece, and one that will fall apart. 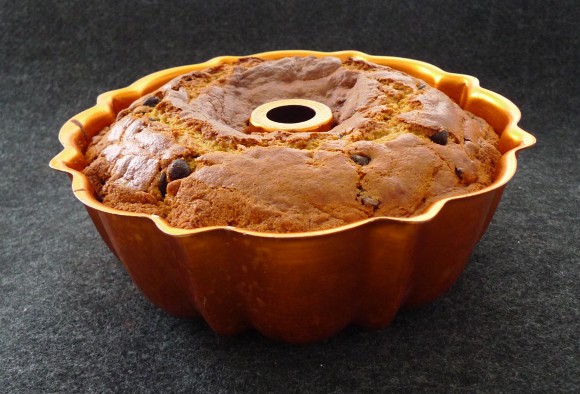 While the recipe below can be done by hand, I do it in my kitchen aid mixer with much success. It also calls for sifting the dry ingredients twice, but one good sift will do. {Edited: A good many of you have asked if these can be made into muffins. They can indeed! I’d make sure to use liners, and reduce the time to 25 minutes, but you might check them at 18. If making muffins, this recipe will make two full muffin tins, and an additional mini loaf worth.}

Preheat oven to 350 degrees F, and butter and flour a bundt pan and set aside.

In a bowl, sift the dry ingredients (flour, baking soda, baking powder, cinnamon, and salt) together.

Beat the eggs and sugar together in a large bowl, or the bowl of your stand mixer. Add the oil and the pumpkin, mixing well, and blend in the flour mixture. Fold in the chocolate chips and pecans, if using.

Bake in the greased and floured bundt pan, for 60 minutes.

Let cool in pan for ten minutes, then turn out onto a cooling rack. 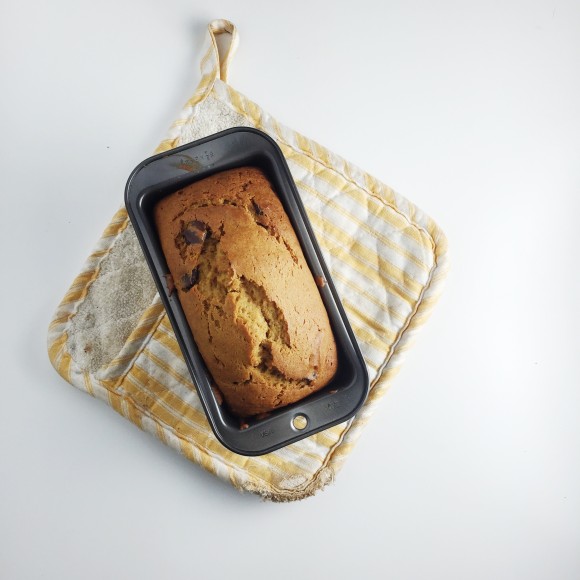