Melt: The Art of Macaroni and Cheese

This review was originally published over at Medium – a new-ish publishing platform that I’ve been playing with for the past few weeks. Medium has a clean, streamlined user interface which is quite conducive to both reading, writing and editing. This was my first post on Medium, but I couldn’t help cross posting here as well – it’s too important of a topic for me to leave off of the second lunch.

Melt: The Art of Macaroni and Cheese
When friends create something great — there is the perfect Yiddish word to describe it: naches. 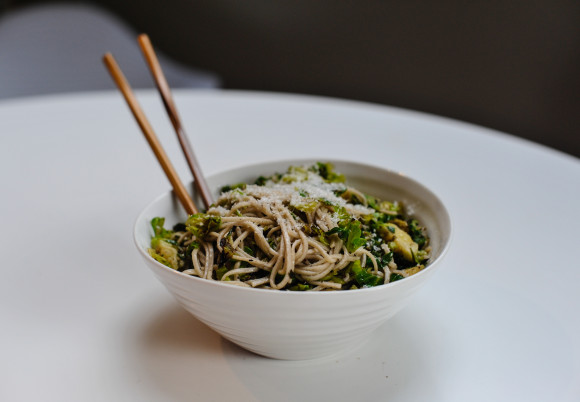 Five years ago, working at Omnivore Books, I started collecting cookbooks in earnest. I do my best to acquire a wide variety of subjects for my collection to learn as much as possible, and while doing so I am picky. I do my research. I avoid superfluous acquisitions. At this point, due to constraints in space and time, every new cookbook needs to matter. At Omnivore, I was in the right place at the right time — surrounded by people who cared about food as much as I did, and my desire for cookbooks became as voracious as my appetite. (It didn’t hurt that I could acquire books at cost — thank you Celia — and received many a review copy). My favorite cookbooks are the ones that tell great stories, are personal, and are unique to a time and a place.

After years of reading brilliant works: Nigel Slater, Paula Wolfert, Melissa Clark, Suzanne Goin, and Patience Grey to name a few, I started getting the itch. I wanted to write my own cookbook. I wanted to contribute to the literary canon. To write a cookbook you need a topic, an outline, and a collection of recipes. To write a great cookbook, you need a purpose, a sense of wonder, passion, and adventure, work ethic, and commitment to creating something truly marvelous. You need community — the people around you are just as much a part of the story. Anyone can write a cookbook, but to write a great cookbook takes so much more. For me, the task seemed daunting. After fretting about the magnitude of taking on a cookbook, I decided to repress my urges.

Over the past year, several of my acquaintances and friends have had proposals accepted, their first cookbooks published, and have even made the New York Times and Amazon bestseller lists. The flickering desires may be returning.

I met Stephanie Stiavetti in 2009, soon after I moved to the West Coast — I remember it vividly: I was invited to wine dinner at a swank San Francisco restaurant where I knew no one, and immediately felt awkward walking through the door. Wide-eyed and a little panicked, I stepped out into the hallway to breathe and there was this tiny force who saved me from loneliness. Her blog was called Wasabimon (now The Culinary Life), and I knew immediately that I’d like her. We passionately discussed food, technology, family, and then somehow this new acquaintance in an instant became a dear friend. It wasn’t until after I left San Francisco that I started reading Garrett’s blog — this too I remember clearly, because I read a single weekly post and proceeded to start right from the beginning and read the blog for hours over the course of a weekend like a novel. (Incidentally, I love doing this, but I feel like most bloggers would cringe at the thought of someone reading a post of theirs from five years back.)

When Stephanie and Garrett sold their proposal, I was thrilled! And, yet, I’ll be quite honest here: when I heard that it was going to be about macaroni and cheese, I was skeptical. There’s a fine line with monographs — single subject cookbooks have a tendency to be flash in the pan, trendy topics that end up remaindered. The lucky ones though, rise as the true authority on the topic, and these are the ones that I spend a good amount of time trying to collect. [Spoiler alert: Melt is the latter].

Melt isn’t really a book about macaroni and cheese. It’s a book about cheese, about discovery, and pushing boundaries in the kitchen. It’s a book for people who truly love food, who will seek out new flavors, and take risks. The recipes, while many of them are quite simple to make, are new, innovative, and may even seem a little bizarre. Risk in a cookbook is hard — as a home cook with a new book in hand you have to place a good deal of trust in the author. And with these two, I do. 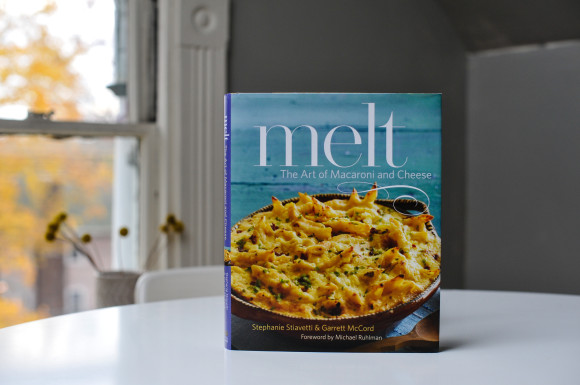 At the core of this book is cheese. And it comes at a good time — cheese lovers these days have much to get excited about. In Boston, we are truly lucky to have Formaggio Kitchen in the neighborhood, where Ishan Gurdal and his family have been building something very special these past twenty years. Formaggio is one of my second homes; their cheese cave rivals none.

For those not lucky enough to live by big city shops, no longer does one have to suffer with supermarket brick cheese as the primary option — many of the great cheesemongers including Formaggio, Murray’s, and Zingerman’s will ship. (I’d be remiss not to mention that Kirsten Jackson, who helped develop many of the pairings in this cookbook book has just started her own cheese of the month club.) 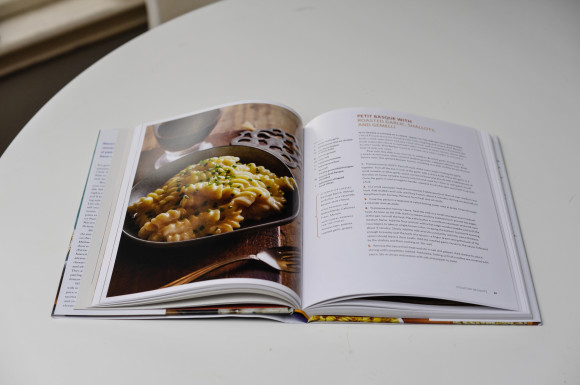 The truth is, I don’t usually write much about cookbooks because reviews make me nervous. To do a book justice, you have to write critically — and writing critically of people you hero-worship is a challenge. But here I’ll try to do my best, to share a taste of the cookbook, and the recipes within.

Melt is divided into five main chapters — the first one is 25 pages about the basics — how cheese is made, types of cheese, sourcing cheese, cooking with cheese, pasta, and cooking methods. The second chapter is completely devoted to salads with cheese and pasta. The third ‘Stovetop Delights’ has many of the more classic recipes you’d think of as macaroni and cheese. There are hearty recipes, and a chapter of desserts.

Each recipe has suggestions for alternative cheeses, wine pairings, and additional pairings for the cheese. The breadth of information in this book is quite impressive, but to give a better picture, I cooked through several recipes.

After reading through Melt from cover to cover, the first recipe that I tried was one of Garrett’s (the two split headnote writing duties) — soba noodles with parmesan and pan-seared brussels sprouts (pictured up top), one of those dishes that I almost always have the ingredients for: soba, oil, brussels sprouts, salt, pepper, chili flakes, garlic, and cheese. I loved the recipe because it was simple — and lately simple has been all that I’ve had time to make. 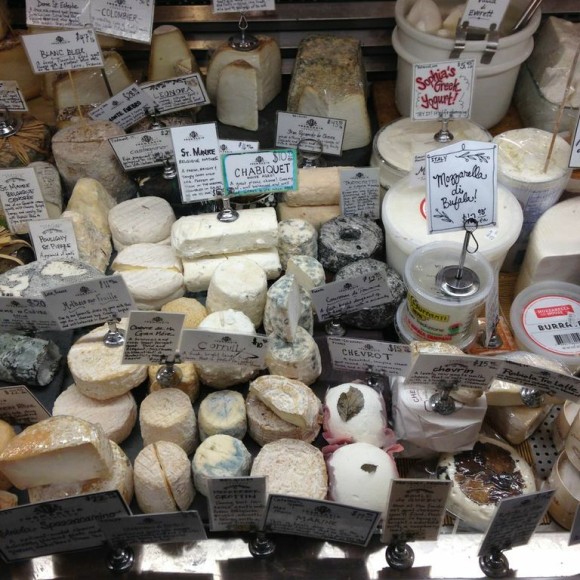 The case at Formaggio Kitchen

After the first attempt was a success — I wanted to push the boundaries a little bit, explore new cheeses I hadn’t tried. There are flavor combinations in Melt that are unlike anything I’ve ever tasted, and so many of them looked enticing. Would it be the chocolate pasta with Bucherondin, hazelnuts, and cherries? Or the Rogue River Blue with crab sauce over fettucine which looked awfully good, as did the Beecher’s Flagship Cheddar, with avocado, lime, and shell pasta. And then there was the Roquefort macaroni with beets, shallots, and poppy seeds. Or maybe thepaneer korma with idiyappam noodles. And then there were the smoked Idiazabal mason-jar potpies with lamb and tomato sauce. These were so cute, I couldn’t stand it.

I finally landed on a dish that was too exciting to pass up: the chicken breast stuffed with Leonora goat cheese, star pasta, and crushed gingersnaps. Leonora was a new-to-me cheese, a citrus-y goat cheese from the Léon region of Spain. The headnote, Stephanie’s this time, was alluring — magical.

The only tweak I made was to use chicken thighs instead of breasts, because, well, I think that white meat chicken is a waste of time, and the thighs are so much more robust. Heh. 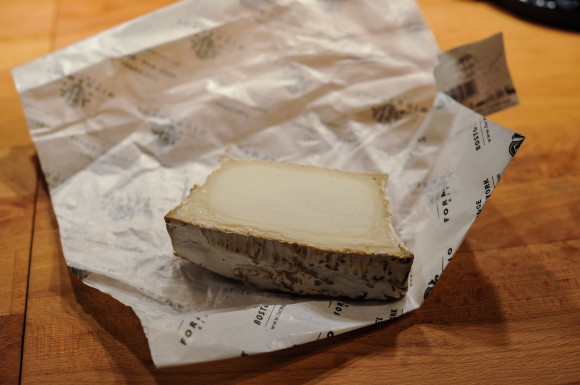 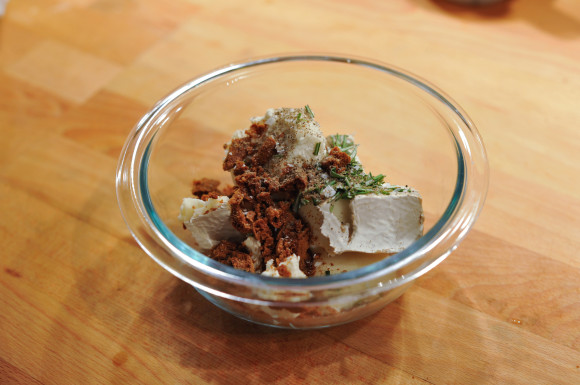 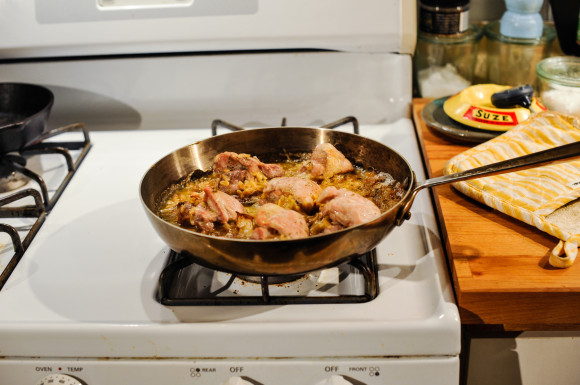 I admit that while making this recipe, I was nervous— sure everything smelled delicious, but could I convince my better half that a dish that included a good amount of pungent goat cheese rind (you keep it in), and crushed cookies would actually be edible? Knowing that perception is half the battle, I decided to bite my tongue and just serve our meal. We tucked in, the bowls were finished, and the only critique being that the meal was a tad rich. (In my excitement, I had neglected to cook any vegetables.) Score #2 for my testing.

Another evening, the weather was cold, and I decided to try the tomato soup with star pasta and Vella dry jack crisps. I couldn’t find Vella Jack anywhere, so I ended up making the crisps with parmesan, one of the suggested alternatives. Normally when I want tomato soup, I take a jar of Rao’s tomato sauce, and thin it down with a little water. It does the trick, but comes at a steep cost, as Rao’s is priced high enough to put one into debt, quickly. This recipe was easy to make, getting depth of flavor from roasting canned tomatoes in the oven before starting the soup. 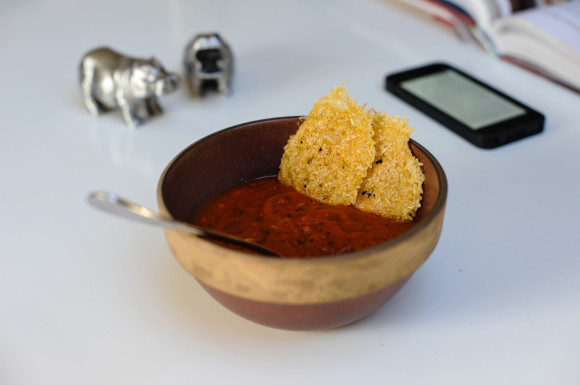 The cheese crisps too are remarkably easy: preheat the oven to 350 degrees, line a baking tray with parchment or a silicon mat, and bake little mounds of shredded cheese for 13-15 minutes until they crisp up. (I only had foil, and this still worked brilliantly.) 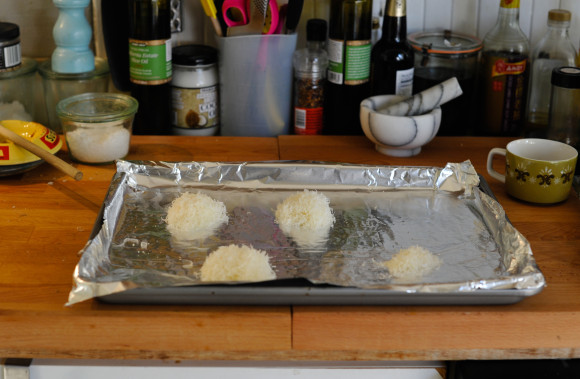 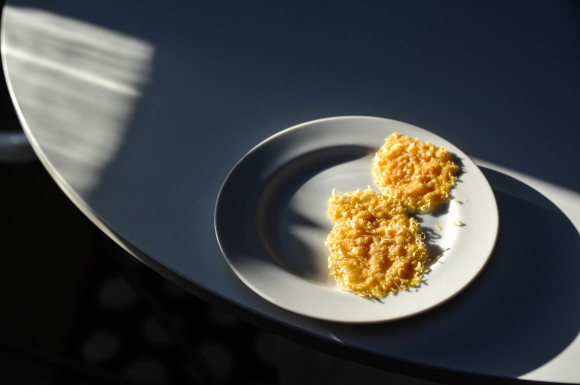 After three successes, and so many more recipes that I’d like to try, I’m able to say confidently that this book is well worth the purchase. It’d make a nice addition to the piles of cookbooks you’ll be giving underneath the Christmas tree. Or maybe consider it for a late Hanukkah gift. Or New Years. Or screw gift giving, and buy it for yourself.

What I’m even more excited about is that this is the very beginning — I’m already looking forward to the next volumes of Stephanie and Garrett that will grace my shelves.

Melt: The Art of Macaroni and Cheese
by Stephanie Stiavetti and Garrett McCord
Published by Little, Brown and Company
224 pages