Daring Bakers: Cheesecake (and a Mixer) 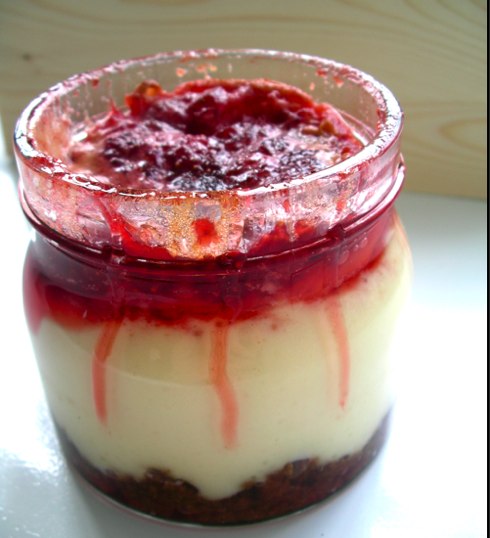 The April 2009 challenge is hosted by Jenny from Jenny Bakes. She has chosen Abbey’s Infamous Cheesecake as the challenge.

Well, silly me, I left this month’s Daring Bakers challenge to the very last minute. I was going to do it early, I swear! I bought the cream cheese a few weeks ago – and in honor of the challenge I got my birthday present from Devon early – a Martha Stewart Blue Kitchen Aid Mixer!!! Although really it’s a present for both of us, because I get to use it to make things like cheesecake, so he gets to reap the benefits. 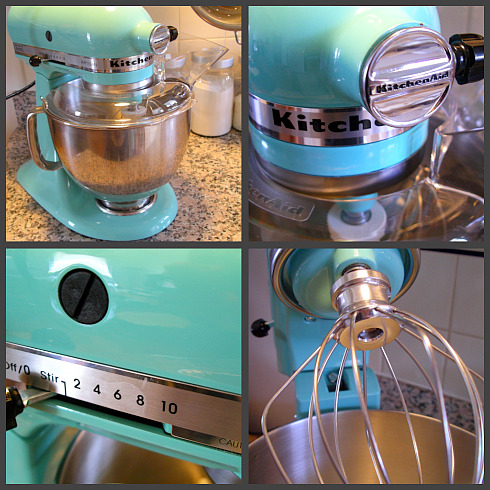 Isn’t she pretty? I’ve been thinking of naming her, and while “Martha” seems to be a little bit sacrilege, it fits her well. 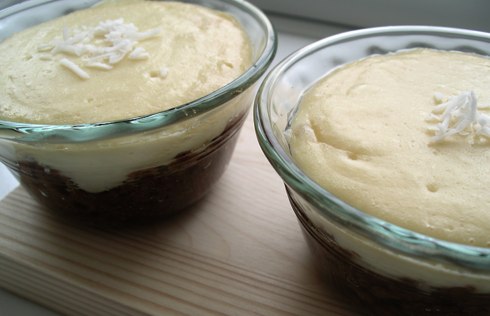 I made two variations here, the top one with Strawberries, left over from farmers market last week, and the other with lime and coconut, in honor of the song I’ve been singing away in my kitchen- You Put the Lime in the Coconut…. But seriously, whoever came up with that combination should get a sticker.

Here is the recipe, with my notes at the bottom:

2. Mix together the crust ingredients and press into your preferred pan. You can press the crust just into the bottom, or up the sides of the pan too – baker’s choice. Set crust aside.

3. Combine cream cheese and sugar in the bowl of a stand-mixer (or in a large bowl if using a hand-mixer) and cream together until smooth. Add eggs, one at a time, fully incorporating each before adding the next. Make sure to scrape down the bowl in between each egg. Add heavy cream, vanilla, lemon juice, and alcohol and blend until smooth and creamy.

4. Pour batter into prepared crust and tap the pan on the counter a few times to bring all air bubbles to the surface. Place pan into a larger pan and pour boiling water into the larger pan until halfway up the side of the cheesecake pan. If cheesecake pan is not airtight, cover bottom securely with foil before adding water.

5. Bake 45 to 55 minutes, until it is almost done – this can be hard to judge, but you’re looking for the cake to hold together, but still have a lot of jiggle to it in the center. You don’t want it to be completely firm at this stage. Close the oven door, turn the heat off, and let rest in the cooling oven for one hour. This lets the cake finish cooking and cool down gently enough so that it won’t crack on the top. After one hour, remove cheesecake from oven and lift carefully out of water bath. Let it finish cooling on the counter, and then cover and put in the fridge to chill. Once fully chilled, it is ready to serve.

Pan note: The creator of this recipe used to use a springform pan, but no matter how well she wrapped the thing in tin foil, water would always seep in and make the crust soggy. Now she uses one of those 1-use foil “casserole” shaped pans from the grocery store. They’re 8 or 9 inches wide and really deep, and best of all, water-tight. When it comes time to serve, just cut the foil away.

Prep notes: While the actual making of this cheesecake is a minimal time commitment, it does need to bake for almost an hour, cool in the oven for an hour, and chill overnight before it is served. Please plan accordingly!
My variations:

Lime Coconut Cheesecake Cups: I substituted the juice of two limes for the lemon, and added two tablespoons coconut milk in a little more than half of the batter . (I was planning on mixing dry, unsweetened coconut in the crust, but then forgot*)

Strawberry cheesecake in a jar: In this one I put the graham crust on the bottom, spooned in the cheesecake in, and topped with a home made strawberry jam that I had started cooking at the beginning of prep: a pint of chopped strawberries with half a cup of sugar and a squeeze of lemon juice, reduced down for about 1/2 an hour on low heat.