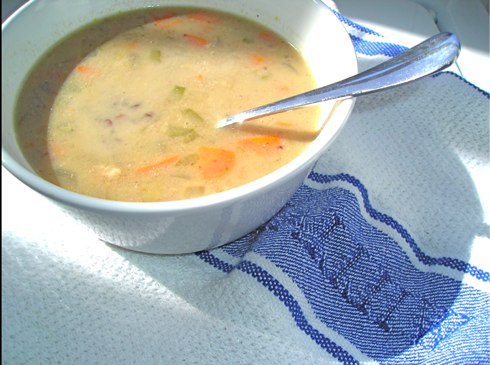 When I was eleven, I went to French camp in Minnesota. It was a beautiful site on a lake in the woods, where we swam, played games, and sang by the campfire. Alas, I seem to only have the quirky memories left: sticking a Lindt chocolate ball in my disco ball necklace which I won for speaking only french one day (it fit perfectly) playing a game of poker after sneaking off from french language class, and a crush on a cute blond boy that had spent a previous summer at the Japanese language camp and called himself the “oni” child, a Japanese term for a demon. At one point I learned the lyrics to Eric Clapton’s “Tears in Heaven” in french..

Predictably, the most memorable thing about camp that summer was the food, a combination of traditional francophone dishes from all over the globe, mixed with traditional Minnesotan comfort foods. Although the water tasted like quarters, and I spent nearly three weeks avoiding water, the food was to die for, and I couldn’t get enough of it (I have the cookbook and still use it). After camp was over, my family picked me up and we drove off on an adventure, eating moose meat and wild rice, and traveling to where the waters of the Mississippi river start, and you can stand in the one place, stepping on both sides of the river at the same time. That summer I fell in love with Minnesota.

Years later, in college, I found myself a best friend who lived right outside of Minneapolis, so it was to my great delight that I found an excuse to go back to the state that I had become entranced with so many years before. Lizzy, her parents, and their many dogs, opened their home to me, and most fortunately for me, their tried and true collected recipe binders. It was one evening that I had a real Minnesota Wild Rice soup that changed my world for the better.

This isn’t quite the exact recipe that they had, but a very close adaptation. Really, I change it up every time, and the absolute best part of this soup is that it is IMPOSSIBLE TO FAIL. Believe me, I never have all the ingredients and it always manages to work out. And if anyone wants to try this, but is panicky about a lack of concrete recipe, I assure you, it will work. If you finish it and feel uneasy about the result, put it in the fridge, let it sit for a day, and taste it again. It only gets better.

1. Cook a box of wild rice according to directions. (Its about an hour or so, until the grains split) and I usually do it in chicken broth. But, you can do it ahead of time and have it in the fridge.

2. In a big pot, saute an onion, 2 carrots, and a couple of sticks of celery (your basic mise) in a knob of butter. For a while… or until everything gets soft, about 15 minutes or so, or really however long you have to sit around and stir. Add chicken broth- I used a quart last time, because it was all I had, and let it all simmer for half an hour or so. (This is when I put my leftover turkey carcass in if I have one, feel free to do the same if you want a more ﬂavorful broth). And that’s your basic soup stock there.

3. Then for the stuff: I added about 1.5 cups of cubed Turkey ham. Dump in
the rice as well- really as much as you want to use- I used all of it.

4. To ﬁnish: in a little bowl, put 1/4 cup of ﬂour, and stir in some of the hot broth to form a soupy thickener, and then add it to the pot. (Now, last time I *get this* had *NO REAL FLOUR* in the kitchen, and so I used Wondra and it worked… wondrously. Finish with some heavy cream, or in my case, about a third of a cup of fat free half and half. And then the KEY INGREDIENT: SHERRY. A couple of good glugs. Dry Sherry, it doesn’t have to be expensive, but you need it! The sherry is the key. I had to use vermouth once, because we were out of sherry, and man it just wasn’t the same. I solved that by pouring in a bit of sherry to every serving I microwaved.